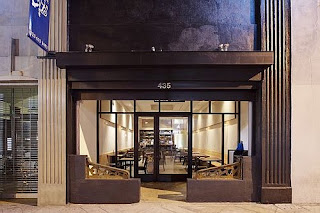 Animal: the speakeasy of restaurants. So hip, there's no sign over its front door. So trendy, "435 N Fairfax" is what shows up on your credit card bill. The place is as close to NYC dining in LA as you can get in the upscale restaurant scene -- think, no more than 40 people seated. The ambiance can best be described as bare, simple, and clean.

And guess what? They've got the food (and drink) to back it up. And the service, oh the service.

The servers are young, but oh-so-much in the know about food. Although our server did inform us he was an aspiring actor (shocking!), this man could tell you everything and anything about the entire diagram of a pig and the preparation of every dish on that menu. Plus, and this is a big PLUS, he wasn't pushy. He encouraged family style (that's how the restaurant is set up), he organized our ordering so that items came out in the proper (and most delicious) order, he didn't balk at us for bringing our own wine (recession, recession), AND he didn't rush anything.

Now for the real matter at hand...

The menu is set up with mostly small dishes, a few entrees, and a half a dozen or so desserts. The wine and beer is international, selective, and affordable. Corkage is $15. The menu changes on a daily/weekly basis, but here's how our night went down:

The waiter brought us out the amberjack and pork belly first. The amberjack was all it was talked up to be. A considerably large portion of cubed pink amberjack with just the right kick of heat. The nectarine added a nice sweetness, and the mint literally tasted like it was just picked from the plant (perhaps?). The pork belly was delicious – perfectly caramelized and melt-in-your-mouth in the center (it single-handedly converted Bourbon over from short ribs). The kimchi (think fresh asian coleslaw; not the malodorous kind), peanuts, and scallion all added a nice crunch to offset the silken pork. 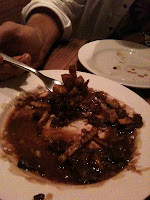 Off to a good start, it was time for round 2: The Poutine and the Petit Basque. The poutine is basically fancy chili cheese fries (no, we’re really not kidding). Homemade fries covered in the good stuff (oxtail gravy) and then given quite the healthy hit of Vermont-aged white cheddar. Bourbon thought he died and went to heaven. Match that with the Petit Basque – basically a sweet and nutty sheep's cheese fondue with delightfully seasoned bits of chorizo mixed in. For a dipping utensil: homemade olive oil-rubbed bread.

Entrée time – Flat Iron and Foie Gras (yeah, we ate a lot. One of those nights where you just have to sleep it off). The flat iron could definitely hold its own, as well. Properly cooked meat. And you could practically lick that truffle parmesan fondue up. YUM. Now the foie gras we ordered was actually the

small plate, but the waiter suggested bringing it out towards the end of the meal because of its richness. And he was right. If you are a lover of those savory and sweet combinations, this is the dish for you. And it literally tastes like when you get pancakes and sausage and slather on maple syrup. It was that good. And that rich. Throw in their homemade biscuit and it was practically dessert.

As if we weren’t already stuffed, we went for it. The bacon chocolate crunch bar. Easily one of their most famous dishes. Again, its’ got that whole savory/sweet thing going for it as well. It’s literally two slices of chocolate (almost a cross between fudge and ganache) with a heavy crust of fresh bacon bits on either side. It’s divine. Sometimes the plain chocolate mousse desserts are boring and fall flat. The bacon adds salt, texture, and depth. 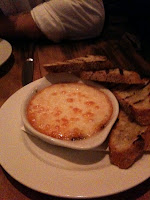 Overall, an amazing night. One of our favorite food experiences yet (the length of this post might have given that away), which is why we thought it appropriate to share it first with you all.

A few notes:
We may have overordered (blasphemy?). Especially if you order drinks, we’d probably recommend getting 3 small dishes, 1 entrée, and a dessert for a couple. If you order like that, it’s actually extremely affordable, especially given the quality and quantity of food. Also, keep in mind that Animal does NOT tolerate substitutions of any kind. Be adventurous and leave happy.