We dropped by the new Sweet Rose Creamery in the Brentwood Country Mart last night and were thoroughly impressed. We got a scoop of the banana ice cream and the salted caramel ice cream. The banana flavor was just like homemade banana bread. The salted caramel was almost a frozen custard consistency. While the ice cream itself had the right amount of salt to add some depth, the shop actually topped the scoop with a bit of high quality salt for some extra punch and texture.

We desperately wanted to try the soon-to-be infamous Valrhona Fudge Pop, but they were already sold out. Next time.

The shop has about 10-12 daily homemade flavors, ice cream sandwiches and pies, and shakes/floats/malts. The store is reminiscent of those old school soda shops and plays the 1950’s music to go with it.

Email ThisBlogThis!Share to TwitterShare to FacebookShare to Pinterest
Labels: Indulgences

The Unassuming Stand of Awesomeness: Yuca's 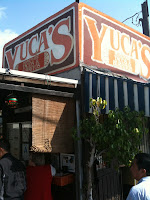 On a lazy Saturday, I asked my roommate what he felt like for lunch. The usual answer was muttered back without much thought, "Tacos." Of course, I should have known. My mind started wandering to all the various taco places I have wanted to try, only to end up on the 2009 Taco Madness Champion from LATaco.com: Yuca's. While I knew to expect some delicious food, I was unprepared for the history and acclaim that Yuca's has achieved.

Yuca's, first opened by Jaime and Socorro Herrera in April 1976, has maintained its classic taco stand appearance and quality since day one. Honored with a James Beard award in 2005, Yuca's continues to gain praise as a taco landmark in Los Angeles. 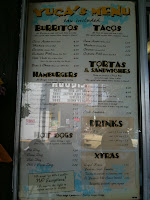 So with a craving for some fresh tortillas, my roommate and I picked up a friend and made our way up Hillhurst to the understated stand that is Yuca's. The line wasn't as long as I thought it might be on a Saturday at lunch, only around 4 people, and the ordering system goes quick. A person sitting outside the small stand writes your order on a paper plate and collects your cash; now all you do is wait.

The menu offers a variety of options: the standard tacos, burritos and tortas, as well some other offerings such as hamburgers and hot dogs. I opted for a carnitas taco, a cochinita pibil burrito, and a Yucatan-style tamale (only available on Saturdays).

The carnitas taco was excellent. As you can see in the picture, the tortillas are so fresh that a soft spot was still sticking to the meat. The carnitas was some of the best I have had. Not too salty or dry, all the best characteristics of the pork came shining through. 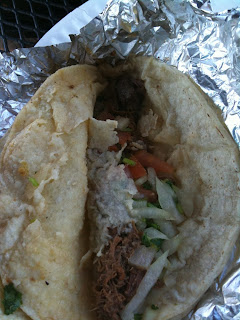 The cochinita pibil burrito was what I was excited for. Cochinita Pibil is a Yucatan Style pork that employs citrus juices to tenderize the meat while it is slow roasted. This pork had an immense amount of richness and flavor to it, as evidenced by the thick sauce that slowly dripped on my plate. The beans were also cooked perfectly; they had a good amount of crispness too them but still blended beautifully in with the meat. 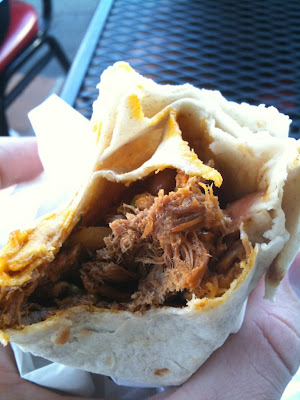 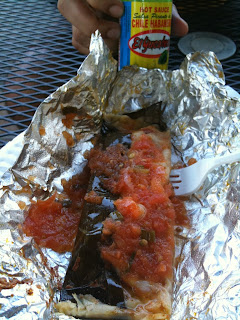 All in all, this was one of my top mexican food encounters. The group agreed that the food was delicious, but that one thing was missing: HORCHATA! Nothing says authentic mexican food like an oversized styrofoam cup full of the classic mexican rice drink, horchata. Yuca's doesn't serve Horchata, but that didn't stop our cravings. After scouring numerous potential horchata spots in Los Feliz, we were directed to a Chinese fast food place (I swear I am not making this up). Lo and behold, there stood the glorious Ole! coolers teaming with icy horchata. A buck fifty later, we hopped in the car and rode home happy.

Email ThisBlogThis!Share to TwitterShare to FacebookShare to Pinterest
Labels: Dining Out and About
Newer Posts Older Posts Home
Subscribe to: Posts (Atom)