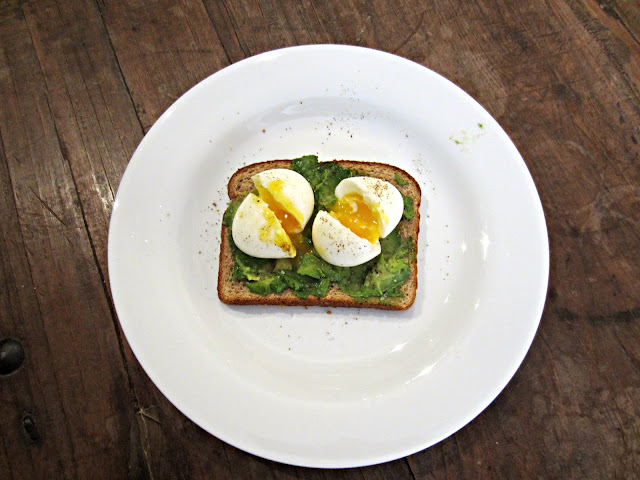 So in my mind, there's weekday breakfast and then there's weekend breakfast. Weekdays are for heating up baked oatmeal and drinking your coffee in the car. Weekends are a bit more leisurely; there's a few extra moments of thought put into my breakfast.

I have an absurd obsession with eggs. Love them. In any which way or form. What would my last meal be? Eggs. I'm not kidding.

One of my favorite forms of eggs is soft-boiled, and I finally came across a full proof recipe at Cooks Illustrated! The egg white is fully set and the yoke is still a bit gooey, but firmer than the yoke of a poached egg. Divine. 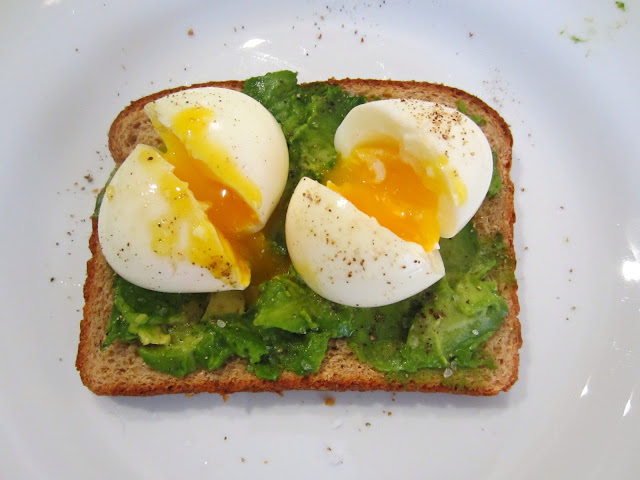 I also have a love for avocado. Growing up in California, we had avocados with every single dinner. I am not overexaggerating. Sliced avocado with sea salt or with balsamic vinegar. It's amazing. Try it.

Have you all been seeing the rage about avocado toast? Toasted up bread with mashed avocado, some mayo or olive oil, sea salt and pepper? It's all over Pinterest and the blogs.

Well I upped the ante with a bit of soft-boiled egg action. It did not disappoint. With some of my favorite coffee, it was a wonderful way to start my Sunday.

avocado and soft-boiled egg toast
adapted from hither and thither
1 slice of bread, toasted (we had wheat, but any type would work)
1/2 avocado
Olive oil
2 soft-boiled eggs
Salt and pepper

Bring 1/2 inch of water up to boil. Place your eggs in the pot (with the shells on). Reduce heat to medium, cover with a lid, and cook for 6 1/2 minutes. Remove eggs and run under cool water, to stop the cooking. Gently remove the shells.

Mash the avocado on top of the toast. You want it to be sort of chunky. Drizzle with a bit of olive oil. Sprinkle with a generous amount of salt and pepper. Set your eggs on top, crack into them so the yoke oozes a bit, and enjoy!
Posted by Bourbon and Bleu at 8:13 AM 1 comment: 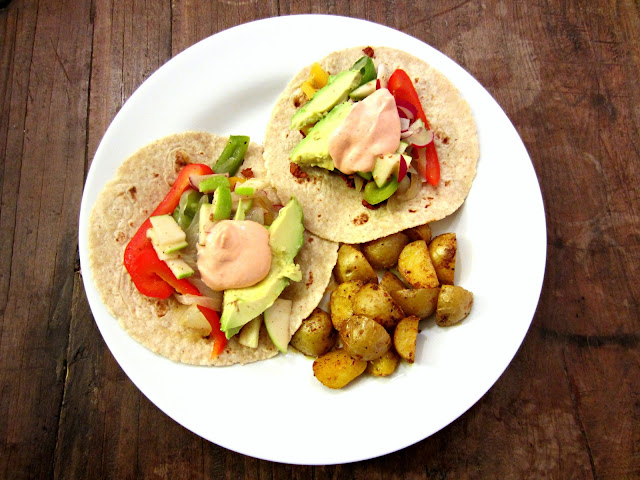 Some nights I just get an undeniable craving for Mexican food. But with the recent bleak weather out in Chicago, I've also had an undeniable need to take shelter in my warm apartment. 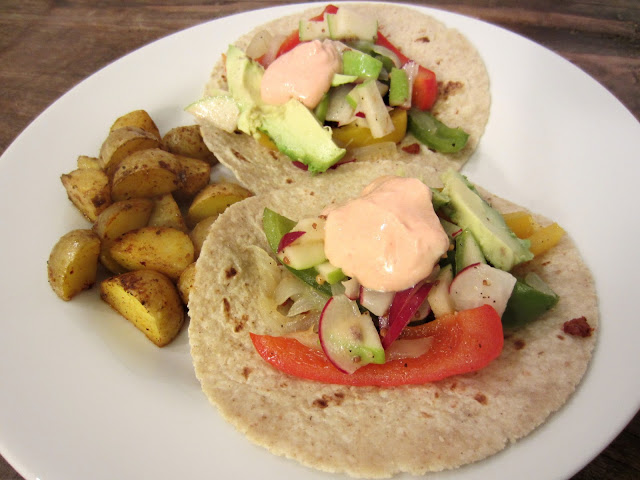 I adore tacos in all forms. I love simple street tacos (carne asada, onions, and cilantro - yes!), fried fish tacos, or swanky, fancy tacos on late-night bar menus. But when I'm at home, I sort of like to mess around with unique flavors. I mean everything tastes good wrapped up in a tortilla, right?

After lots of back and forth, I settled on soyrizo + sauteed onions and peppers + apple and radish salsa in a maple mustard vinaigrette + sliced avocado + greek yogurt with sriracha mixture. Besides being a tad bit on the messy side, the tacos were amazing! Perfect combination of spicy, tangy, crunchy, creamy. I would make these again and again. 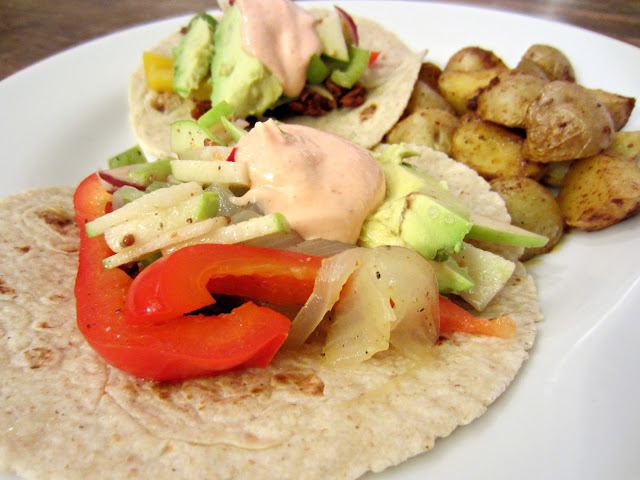 Cook the soyrizo in a pan over medium heat until some of the moisture evaporates, approximately 5 minutes.

Cut the apple into thin sticks, about the size of matchsticks. Cut the radishes into thin rounds. Mix the apples and radishes with the mustard, goat cheese, vinegar, and maple syrup. Season with salt and pepper.

Mix the Greek yogurt with the Sriracha.

Serve it up as a taco bar with all of the toppings in separate bowls.
Posted by Bourbon and Bleu at 8:30 AM 1 comment: 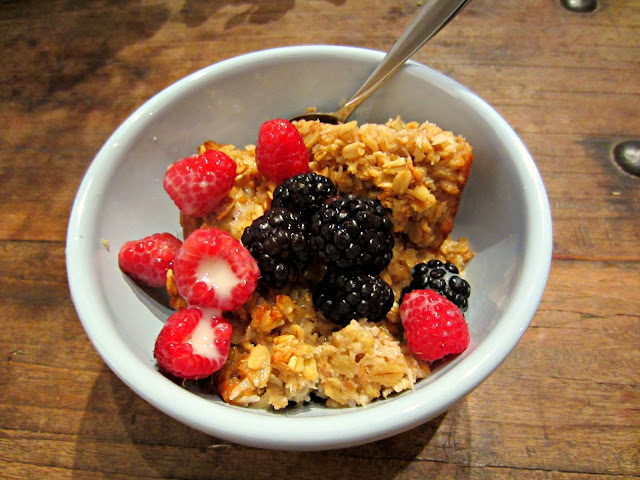 You know what they say....breakfast is the most important meal of the day. Most of the time, I'm running out the door, coffee in one hand and granola bar or slice of toast in the other. I'm usually starving by about 10am.

I made a pan of baked oatmeal this past weekend. It's delicious and keeps me unbelievably full. I went with a pretty straightforward recipe, but I'm looking forward to changing it up (maybe some quinoa or steel cut oats?). 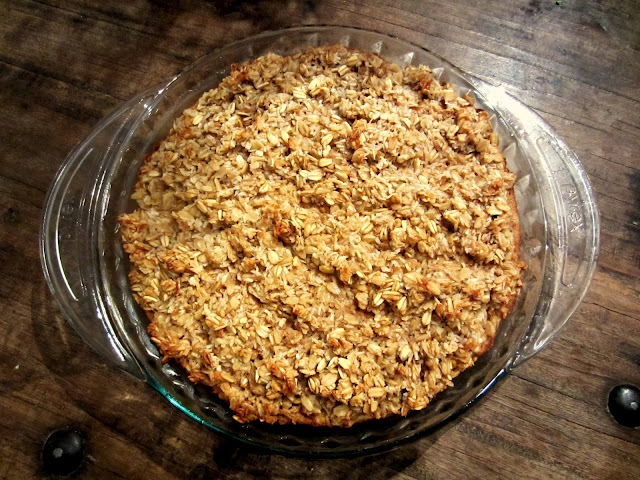 Every morning, I scooped out a portion into a bowl poured a bit of almond milk over it (you can use whatever milk suits you) and popped it in the microwave for about a minute. Sprinkle on some fruit (berries...bananas...oooh, pears would be delicious!) and you have yourself a quick and wholesome breakfast. 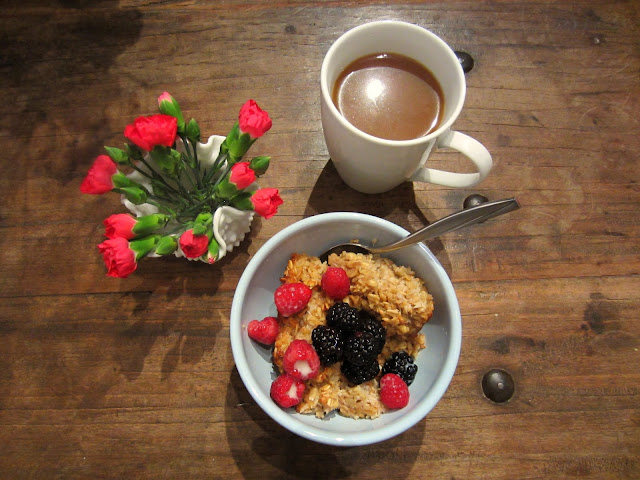 Mix together syrup, oil, and eggs. Mix with remaining ingredients. Bake for 35 minutes in a round pan or 25 minutes in a 9 x 12 dish.
Posted by Bourbon and Bleu at 7:49 AM No comments: 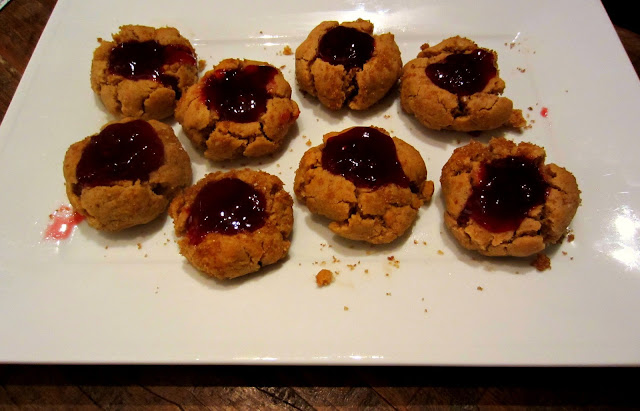 For all of you peanut butter and jelly lovers out there, this ones for you.

These cookies are just the right mix of salty/savory (peanut butter) and lovely sweet (jelly). They really are a match made in heaven.

We followed Miss Martha's recipe pretty closely and they turned out fabulous. We mistakenly left them out on a cakestand and managed to eat through a full batch in a weekend. Apparently New Year's resolutions do not exist in our house.

We also made this lovely concoction this past weekend and it was sinfully gorgeous. I - in my excitement - forgot to take a picture. So we shall be making them again shortly and posting here. Oh darn....
Posted by Bourbon and Bleu at 8:00 AM No comments: 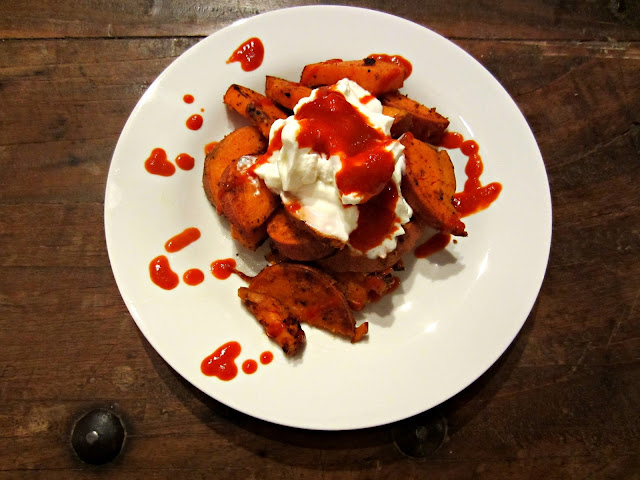 These potatoes are ridiculous. Like my new favorite comfort food. Except they're totally healthy.

Warning: they have a kick to them. You know when you used to eat Flamin' Hot Spicy Cheetos and they were so spicy, but so addicting, so you just had to keep eating them? It's sort of like that.

By the way, if you still each Spicy Cheetos, I won't judge you.

Oh and this whole Greek yogurt and Sriracha combination? Phenomenal. I put it on everything. Tacos. Eggs. Do it...

Thinly cut the sweet potatoes. Toss in a pan over medium heat with the oil, cumin, red pepper flakes, salt and  pepper. Cover the pan with a lid and cook until the potatoes are fork tender, about 15 minutes. Stir frequently.

Serve with a large dollop of Greek yogurt and a generous drizzle of Sriracha. Have a glass of water nearby.

Posted by Bourbon and Bleu at 8:33 AM No comments: 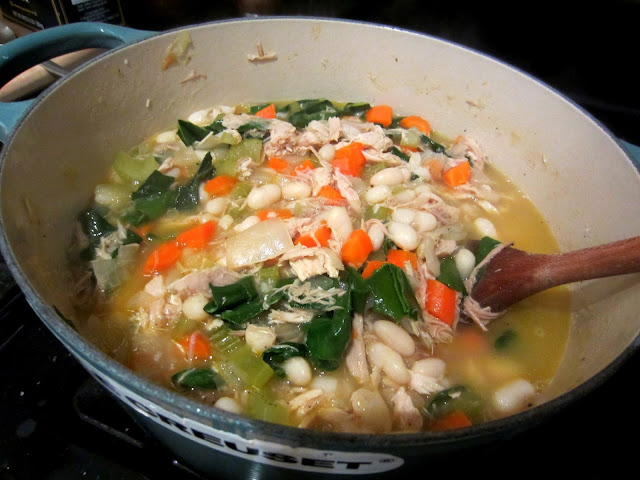 I've determined the perfect answer to a long, cold day.

I made white bean, turkey, and swiss chard stew to be exact. But, honestly, any and every soup is perfect. It warms the soul and fills you up. Oh and it's pretty inexpensive.

And I love that you make a giant batch of it and then make it stretch by adding a bit more meat and a bit more broth.

There shall be more soup. And I'm excited about it.

Salt and pepper, to taste

About 15 minutes before serving, mix in swiss chard and stir through the soup until the chard wilts. Add lemon juice. Season with salt and pepper.

Service with slices of lemon and shredded pecorino.
Posted by Bourbon and Bleu at 9:20 AM No comments: