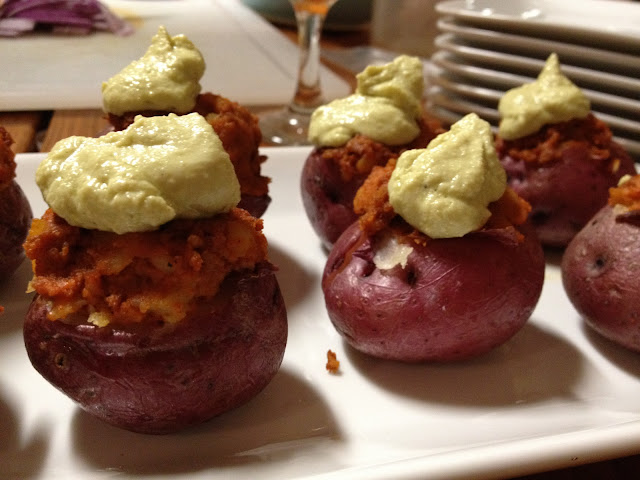 Two nights ago, we were invited over to Chris and Natalie's home for a dinner party. (You can see all the delicious pictures on Natalie's blog.) There were 8 guests in total, 1 who is vegan and another who is gluten-free. Chris and Natalie were up for the challenge and planned an entirely vegan, gluten-free meal. I was charged to bring an appetizer within those parameters.

I thought that it couldn't be thaaaaaat difficult to come up with a dish. So I took to the internet and googled up a storm. Wow, everything vegan out there comes with some form of a carbohydrate and everything gluten-free there is served with cheese.

At this point, I was in a slight panic. It was late, and I needed to get to the grocery store and prep the food because I knew I would have no time the day of the party. But then, after scouring through some of my favorite food blogs, the idea of twice baked potatoes came to me. Why not make them mini and vegan?

So I left for TJs and grabbed a bag of small red potatoes. I stared at the bag and thought, what's the best part of twice baked potatoes? The bacon and the creamy sour cream. Uh-oh, how can I replicate that in a vegan sense? Think, Heather..Think. 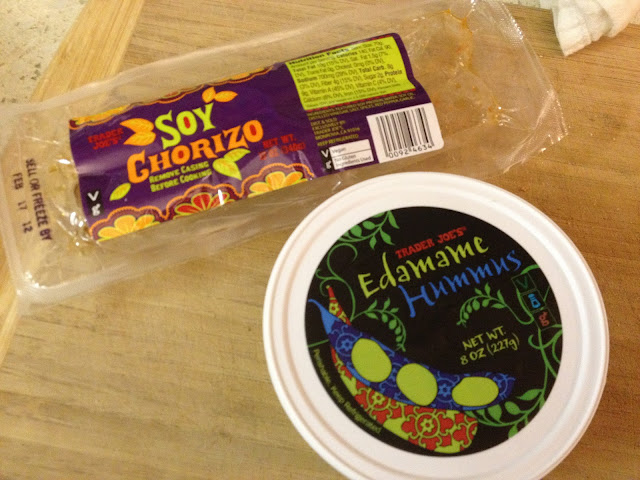 Ok, so the bacon part was pretty easy, I grabbed a package of soyrizo. It's meaty, flavorful, and would blend well with the potato. The creamy, tanginess of sour cream? Now that's a bit more difficult. I picked up a container of edamame hummus. (Stay with me here.) The hummus adds the creamy texture and the edamame has a more mellow flavor than sour cream, but it actually complimented the spiciness of the soyrizo perfectly.

The dish ended up being a success. But, seriously, props to all you vegan and gluten-free people out there. It is not an easy feat!

Preheat oven to 400 degrees. Wash and dry potatoes. Lay them on a sheet pan and drizzle in olive oil. Bake for 25-30 minutes until potatoes are easy to pierce with a toothpick. Let potatoes cool so they're easy to handle.

Remove soyrizo from package and casing. Cook on medium heat until some of the moisture has been cooked out (about 5-7 minutes). Mix half the soyrizo with half the edamame hummus (there's no exact science to this).

Cut top of the potato off. Using a mini melon scoop, pepper corer, or spoon, carefully scoop out the insides of the potato, while keeping the potatoes exterior shape in tact. Add potato filling to the soyrizo/hummus mixture. Mash the filling until all the ingredients are blended together.

Increase oven temperature to 450 degrees. Fill potatoes with the mixture, so that the filling is slightly overflowing. Bake for 10 minutes, or until heated throw. Top with a spoonful of edadmame hummus and serve. 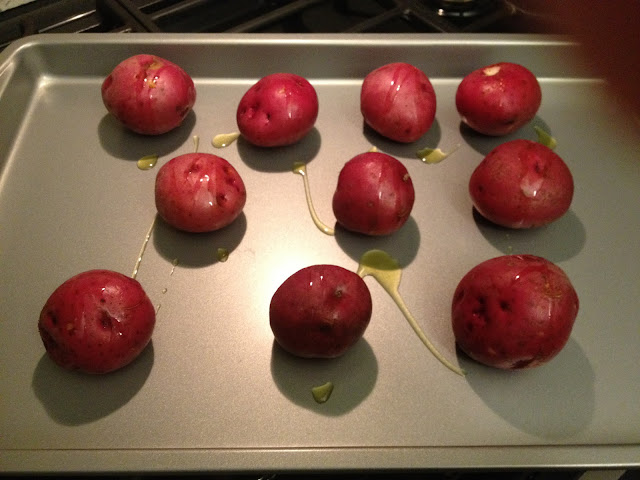 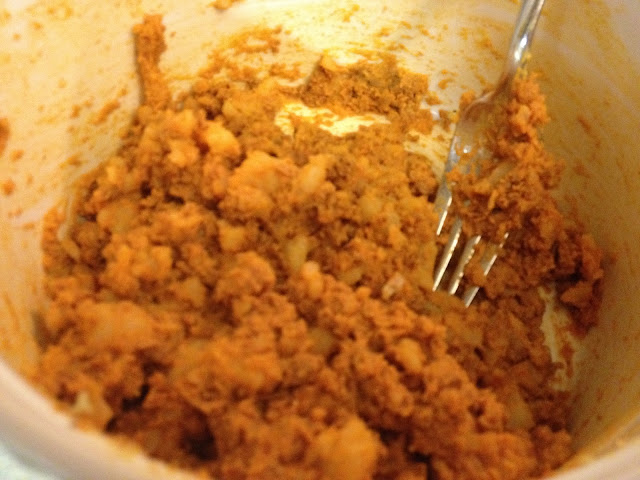 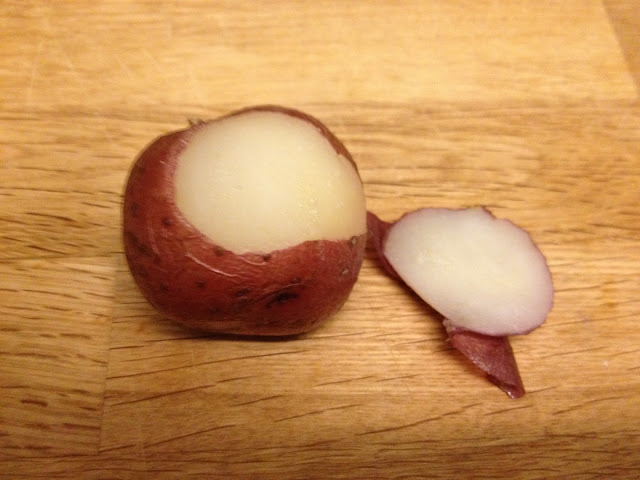 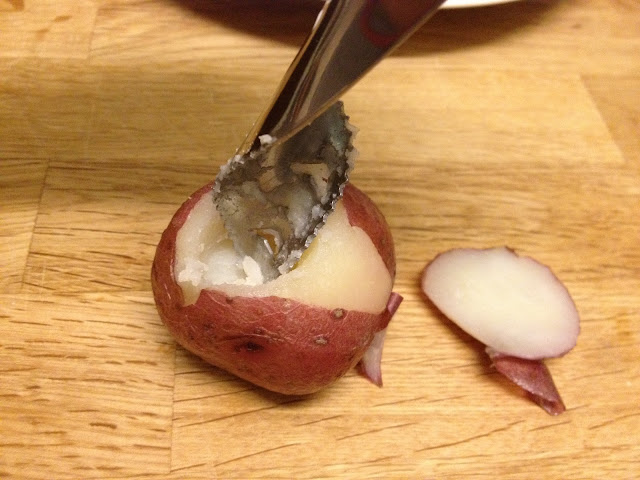 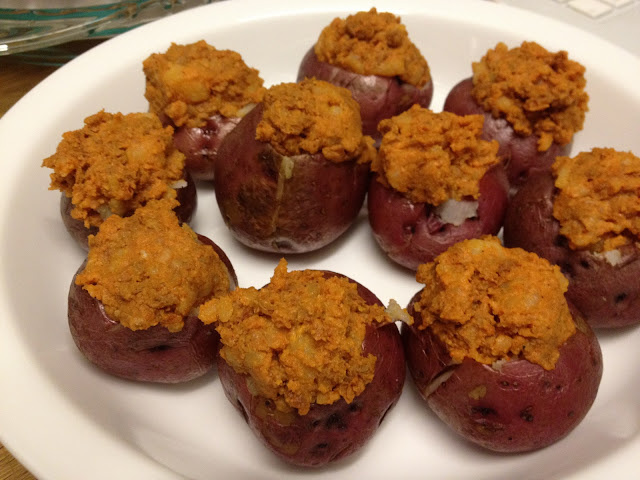 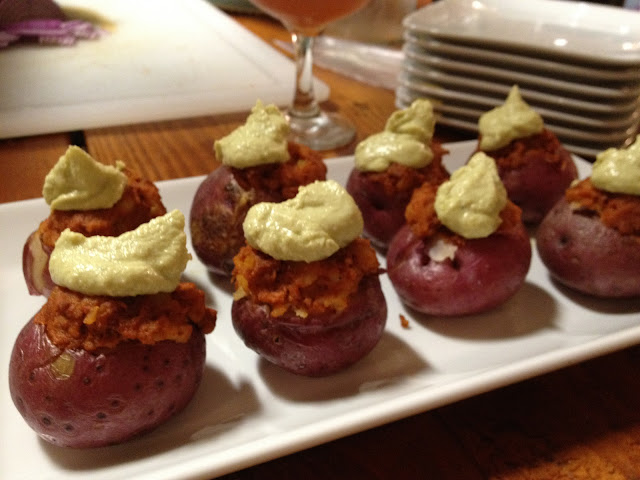 Posted by Bourbon and Bleu at 6:00 AM

Email ThisBlogThis!Share to TwitterShare to FacebookShare to Pinterest
Labels: Entertaining