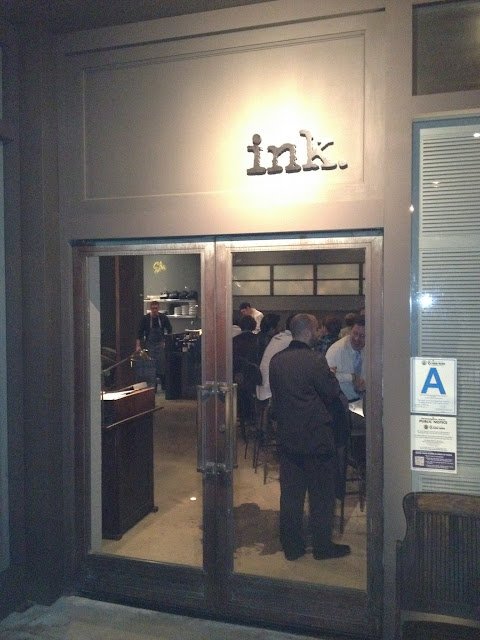 As a birthday surprise, Josh booked a reservation at Michael Voltaggio's new restaurant Ink. I'm an avid Top Chef viewer and a huge fan of Season 6, especially. He checked their website every day for weeks until he scored one. Worth it.

The restaurant was simple and clean in decor with its dark woods and industrial metals. The tables are almost barren (no candles or flowers here) and servers bring you over plates and silverware as needed for your courses. There's an open-air kitchen, omakase bar (not yet in use), and a beautiful bar with shelves and shelves of top-notch and unique bottles of alcohol.

We arrived to our reservation early and headed to the bar. The first thing we noticed were how genuinely nice the staff were. It's pretty common to experience an air of - how do I put this - snootiness at constantly booked up restaurants. Not here. (Cue giant sigh of release.) The hostess was sweet and enthusiastic, the bartenders were chatty and engaging, and our server was hilarious. 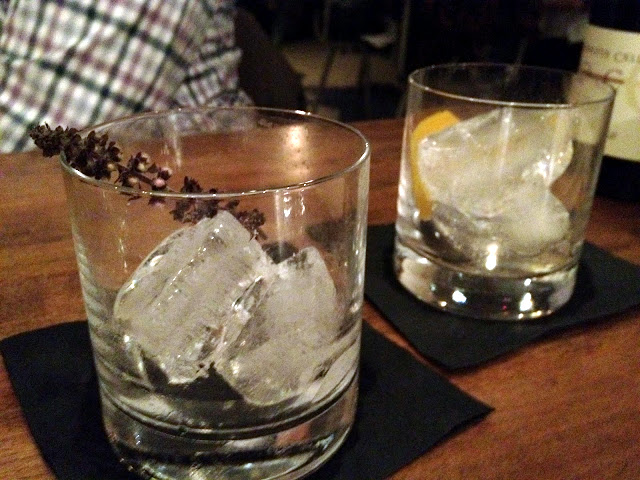 (tequila: serrano, lime, grapefruit, soda; campari: gin, cardamaro, orange)
Our drinks were fantastic and kept us very entertained until our table was ready. The Tequila had just enough heat where you could feel it in the back of your throat, but the grapefruit and soda kept it refreshing. The Campari was flavorful with a perfectly measured bitter undertone. Unfortunately, we didn't get a picture until our drinks were finished. Empty glasses = happy drinkers. 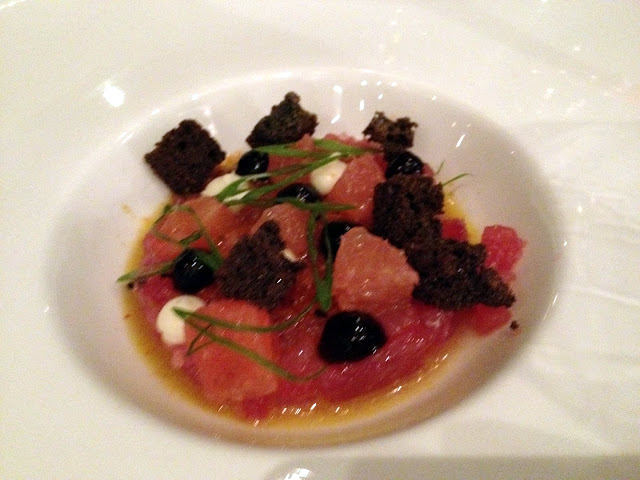 (bigeye tuna, parsnip sesame cream, grapefruit, soy gel)
This is the dish for all you sweet and salty lovers out there. See those black gel ball things? Yep, that's soy sauce - Michael Voltaggio style. They're insanely salty on their own, but mixed with those citrusy sweet grapefruit sections - utter perfection. Let's not forget the main attraction: the bigeye tuna was a wonderful, luscious texture. When paired with the vegetal sesame cream and crunchy, bitter croutons, the dish all came together for a bright and exciting first course. 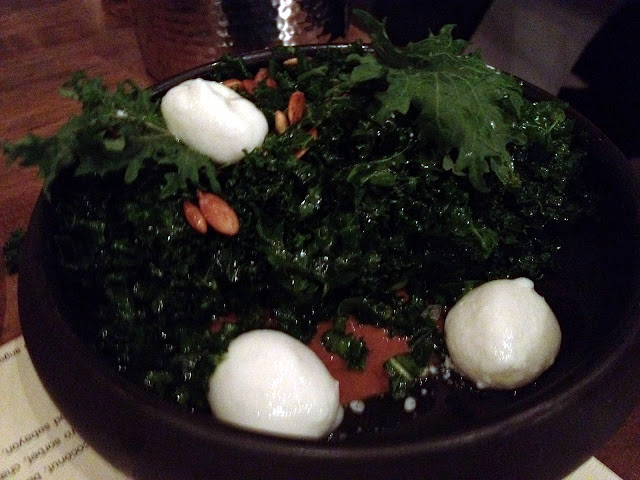 (kale, burrata, pumpkin seeds, pumpkin preserves, yuzu)
This is one of those dishes where you need to get every flavor in each one of your bites. I'm a burrata fanatic, so I thought I would be in love. The dish was great, but I wasn't blown away like I had been with the tartare. One of our neighboring diners mentioned that we needed to scrape down to the bottom of the bowl to get the preserves and yuzu. Theerrree it was. When you got the earthy kale, creamy burrata, crunchy seeds, and sweet and tangy preserves and yuzy together in one bite, the salad was incredible. I just wish I had figured this out before we were almost done. 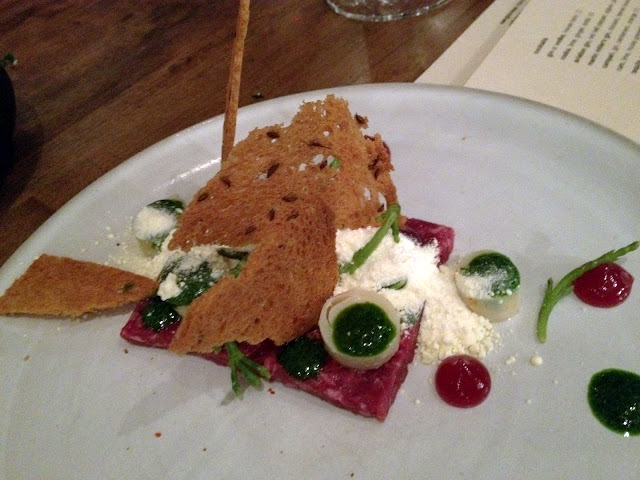 (beef tartare, horseradish, hearts of palm, sea bean chimichurri)
Our second favorite dish of the night. The beef itself was seasoned simply - just with some salt and pepper, if even that. The beef was incredibly chilly (is that a weird comment to make?). I've had numerous carpaccios and tartares, but none this cold. It truly worked for this dish. Especially when you're Michael Voltaggio and can whip out your handy dandy nitrogen tank and throw some frozen horseradish on top. I couldn't get enough. The chimichurri added a giant pop of flavor. I was literally eating the sauce off the plate with my finger. Wow, someone should teach me some table manners. Oh, and those bread crisps? With the little rye seeds in them? Yeah, those were epic. Josh hasn't stopped talking about them. 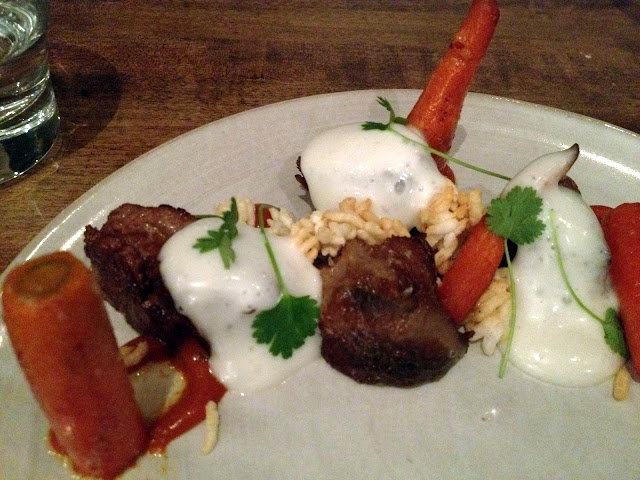 (veal cheek, red curry, nante carrots baked in salt, fried and sticky rice)
Josh is a curry fanatic so he just about inhaled this dish. The veal was tender and was ever-so-lovely with the sweet and warming flavors of the red curry. My favorite part of the dish was actually the fried and stick rice. It was kind of like rice crispies cereal on crack. 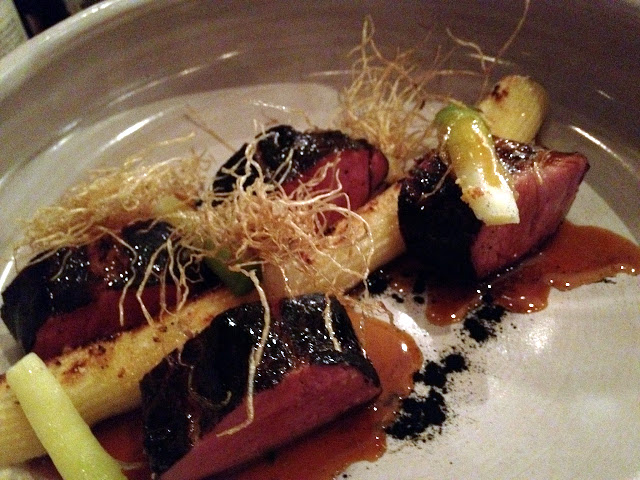 (berkshire pork, charcoal crust, macaroni and cheese, leeks)
Our favorite dish of the night and probably the best pork I've ever eaten out at a restaurant. The meat was perfect cooked - so juicy! - and rubbed in a charcoal crust, which gave it a bit of this bitter, smoky flavor. The leeks brought in this soft and sweet aspect to balance the bitterness out. I'm mildy obsessed with the presentation of the macaroni and cheese. There was one (singular) macaroni stuffed with cheese. I sort of think this idea is genius and will be copying it for a future dinner party. 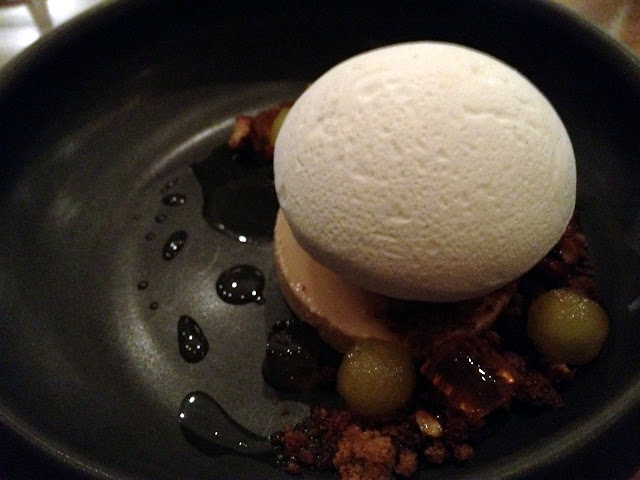 (apple, creme caramel, burnt wood sabayon, walnut)
I'm not exactly sure what happened, but we somehow got our first dessert before our last entree (see chicken and waffles below). We're easy going people, so we didn't mind. And, you know what? It kind of worked. We had just eaten rich veal and creamy macaroni and cheese. This apple dessert was just light enough to cleanse our palate a bit so we could tackle the chicken and waffles. The dessert was delicious, but it was truly the smells that entranced me. It somehow captured Thanksgiving spices, scotch, and smoky wood barrels all in one. I need a candle in this scent. 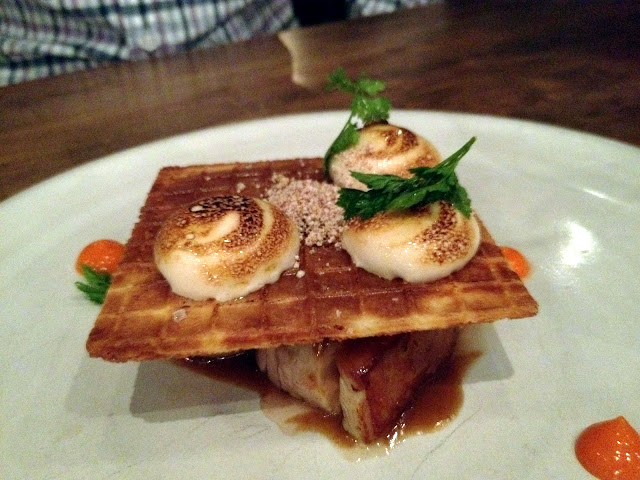 (jidori chicken, waffles, smoked maple, hot sauce)
This has to be the restaurant's most popular dish. We saw about 25 fly past us in the 2 hour time span we were there. The chicken is fabulous - cooked sous vide. And then there's this hot sauce. It's vaguely reminiscent of tobasco, but taken up about 1000 notches. When you mix the chicken with the hot sauce, fluffy smoked maple, and the ever-so-slightly-crispy waffle, you're transformed. I'm sort of new to this chicken and waffles game (I know, shame on me). But I see a Roscoes visit in my future. 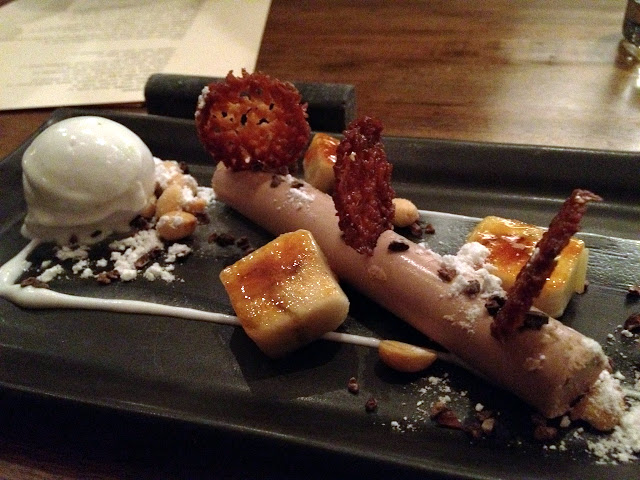 (peanut butter, milk chocolate, coconut, banana)
If Josh was on a deserted island and could only bring 1 food item, it would be a toss up between a Chipotle burrito and peanut butter. If there's ever a peanut butter dessert on a menu, we order it. And when you add frozen coconut, caramelized bananas, and chocolate - I'm sold. The dessert is decadent in all the right ways. And since most of the items are frozen and creamy, it's the perfect option for an ice cream lover like me. 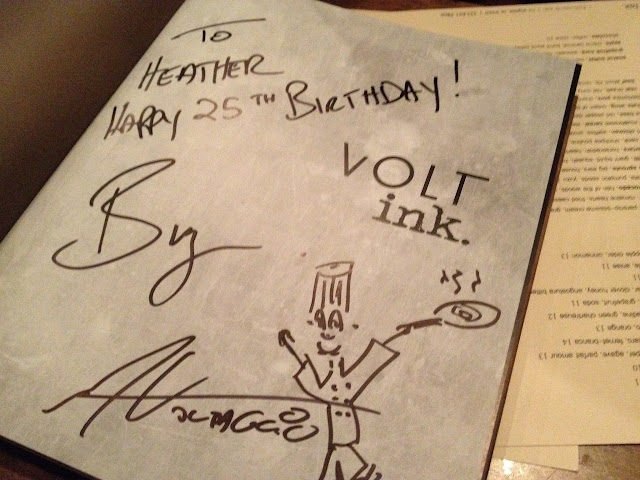 The dinner ranks up there with the best we've ever had in Los Angeles. The food was incredible and reasonably priced (considering the caliber of the cooking). We bought Michael and Bryan Voltaggio's new cookbook, Volt ink., so we got to walk up to the kitchen and chat with Michael for a few minutes. (Yeah, we're on a first name basis now.) I'm pretty sure I skipped out of the restaurant like a little girl.
Posted by Bourbon and Bleu at 9:49 AM