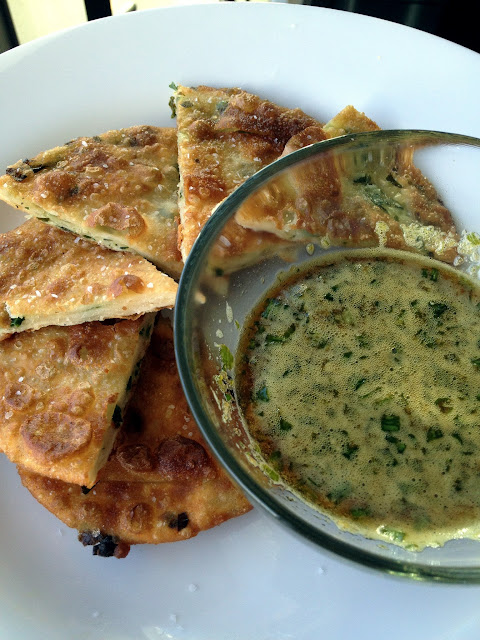 I've enjoyed discovering great Chinese restaurants throughout Chinatown and San Gabriel Valley during my time in LA. One of my go-to dishes is the scallion pancake: a seemingly simple, yet satisfying composition of flaky dough layers pierced by bright scallions and distinctive toasted sesame seed oil.
In preparation for making croissants from scratch (coming soon!), I found a great article on the art of laminate pastries using the scallion pancake as an example and I knew that I had to make my own.
The idea behind laminate pastries is to essentially create a series of dough layers separated my thin layers of fat (butter, oil, etc.). This is what makes croissants so flaky and delicious, and it's also the secret behind the perfect flaky and chewy scallion pancake.
The other thing I discovered was the concept of "hot dough." Whereas most dough for breads and the like call for cold water to establish a good gluten structure, hot dough uses boiling water to effectively deactivate the components from creating a springy and resistant dough. Hot dough is key to making a good scallion pancake, as well as making dumpling wrappers. 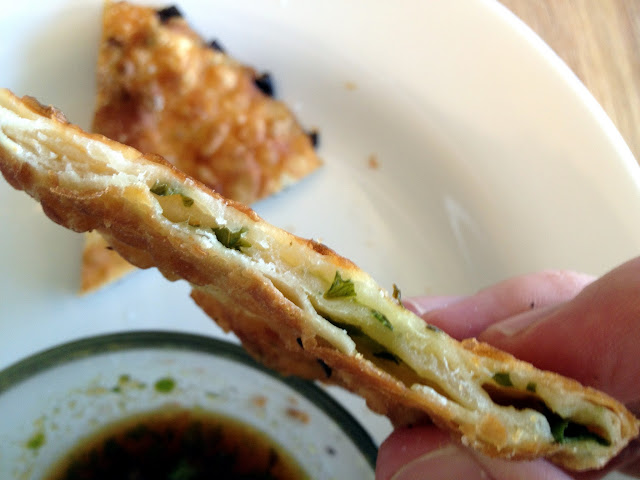 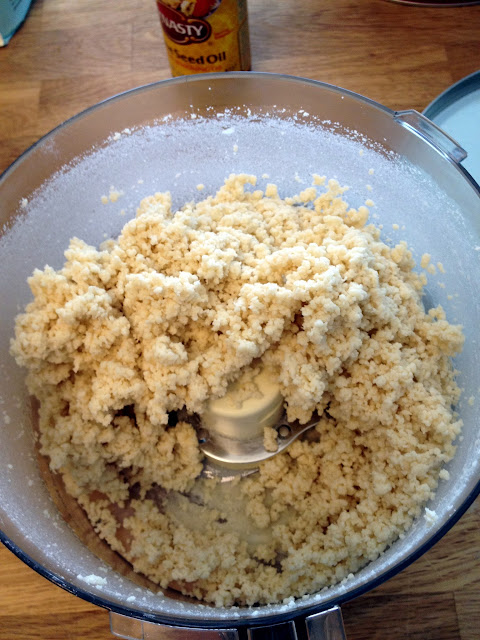 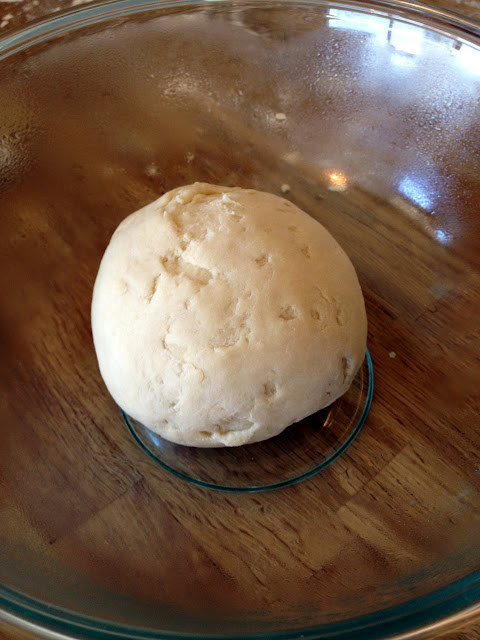 Divide the dough into 4 equal parts. Take a single piece and roll out into an 8-inch thin disc. Use a dusting of flour as necessary as you work with the dough. With a pastry brush or other utensil, spread a very thin layer of sesame oil on the face of the dough. Roll the dough up in a tight cigar shape and coil into a cinnamon bun shape, tucking the outer end under the coil (this creates the first set of dough layers). Press the bun down and roll with a pin again into an 8-inch disc. Spread another thin layer of sesame oil and cover with finely chopped scallions (roughly 2 handfuls). Roll up the dough again and coil into a bun. Roll out a final 7-inch disc and set aside. Repeat the procedure with the other 3 dough pieces. 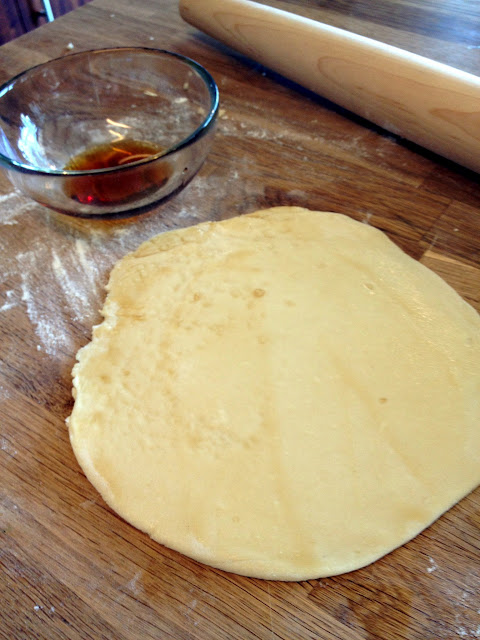 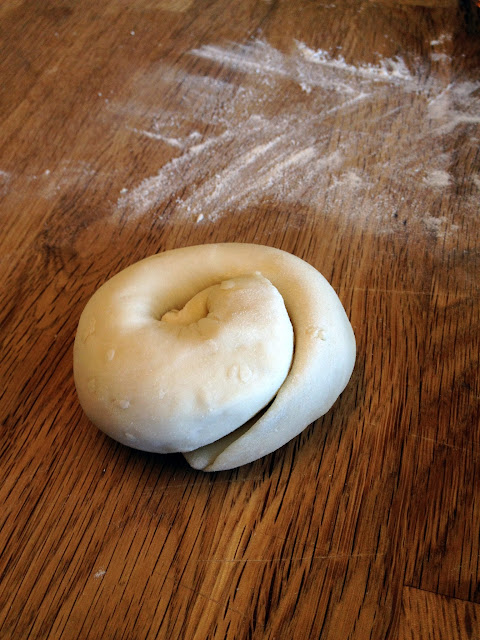 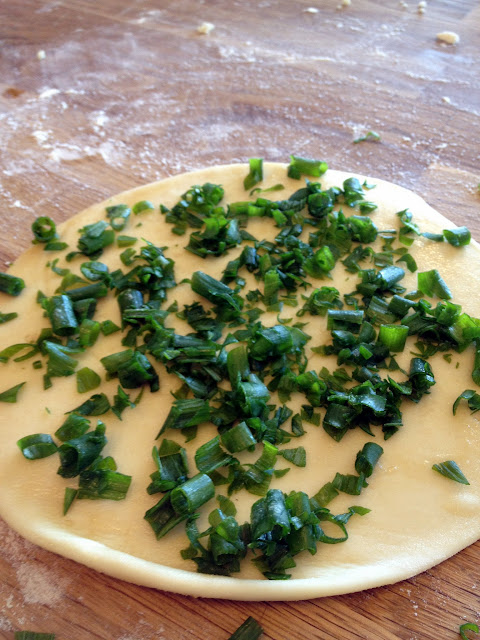 Place a quarter cup of vegetable oil in an 8-inch non-stick pan and heat on a slightly higher than medium setting. Once the oil begins to shimmer, gently slide the pancake in and cook for approximately 2 minutes. Once the bottom side is browned, gently flip and cook the other side for approximately 1 and a half minutes or until brown. Set the pancake on a paper towel lined plate to drain the oil. 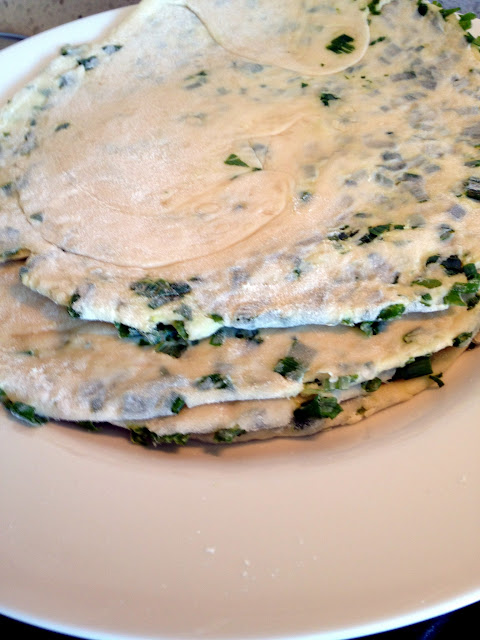 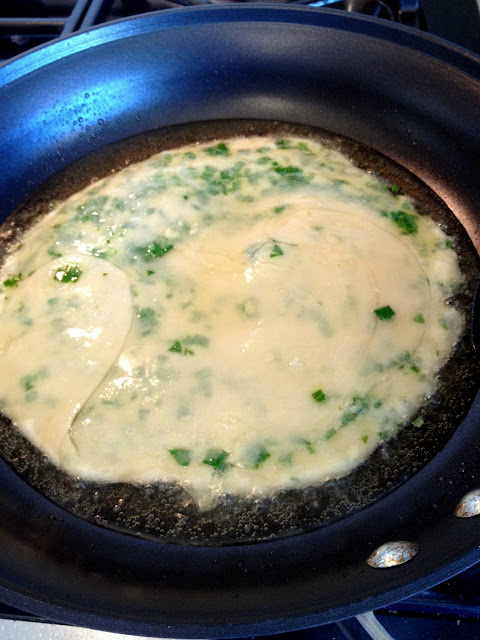 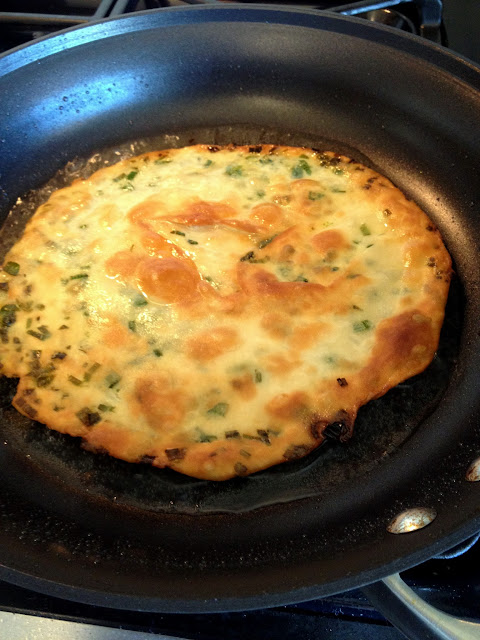 Either before or immediately after cooking the pancake, combine the sauce ingredients in a bowl or small mixer. Slice the pancake into 6 pieces and serve immediately.
This dish is so comforting and offers the perfect pairing of savory and tart. Enjoy as an appetizer or cook up some veggies and have a pancake for dinner!
Posted by Bourbon and Bleu at 9:00 AM