Tasting at The Bruery 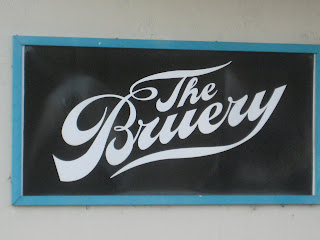 Bourbon and I headed over to the The Bruery last weekend with his parents and had an amazing experience. The Bruery is a craft brewing company based out of Placentia (Orange County) who aspires to "[push] the limits of what 'beer' is." They have a tasting room - open Fri 4-10pm, Sat 4-10pm, and Sun 12-6pm - and offers up tasting flights of 5 beers for $8 (logo glass included), which is a good deal in my book.

I've pretty much been obsessed with this brewing company ever since the LA Craft Beer Fest, back in May, where I got to taste Cuvee Juene. Loveliness. It's a lambic style ale that they aged in Chardonnay barrels. It's got a pucker to it (definitely in the sour beer category) and some apple and citrus notes. So I was so excited to get a glass, but - of course - they were fully tapped out. Blasphemy. But it's okay, Bryan Tetzlah, one of the account managers, promised to take care of us.

Bryan started us off with the Orchard White, "spiced with coriander, citrus peel and lavender." I was all about this beer. So light and versatile - you could pair it was any meal, but I definitely picture a nice roasted salmon or some barbecued citrus chicken. yum. 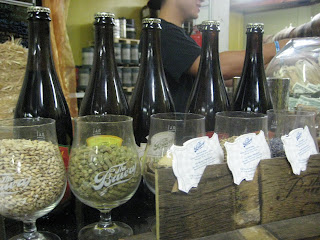 Next up were the Saison Rue and the Hottenroth. The Saison Rue is a malted, spicy beer. Bourbon's parents were big fans and took home a couple of bottles. Bryan promised I would like the Hottenroth since it had some of the sour qualities of my lovely Cuvee. It was awesome! I ended up buying a bottle to bring home and we drank it last night at a Halloween dinner party paired with some homemade sweet potato fries and sesame peanut aioli. Perfect pairing. The beer is light (3.1% ABV), fruity and ever so fermented with a pucker of citrus. I think it's the wine-lover's beer.

Our final rounds were some of the heavier hitters - Autumn Maple and Two Turtle Doves. Autumn Maple brings back ever Thanksgiving memory you've ever had. You can taste a bit of sweet potato and those Holiday spices. Two Turtle Doves was more in the stout realm of beers with toasted pecan and cocoa flavors. 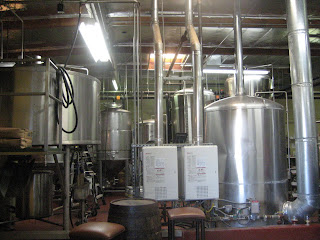 Bryan then let us try some of the secret stash - the barrel aged Partridge in a Pear Tree. Hands down, best beer I have ever had. Despite all four of our extremely different tastes in beer, we all loved it. The Bruery described it as "dark brown in color fruity and complex with a rich malt backbone." It was so complex. It initially tasted like carmel, but once you swallowed it down it had more tastes of wine and sherry. But, with all good beer, they're not making too many bottles. So it's fairly difficult to buy. If you see one, snag it, please!


If you want to sample some great beer, head on down to The Bruery's tasting room. Also, most Whole Foods, Bristol Farms, and BevMo's carry it, if you want to buy some bottles for yourself without leaving the LA area.