So we headed over to the grand opening of N.Y. + C Pizza in Santa Monica last night with our friends Natalie and Scott. We've been pretty excited about this place ever since first reading about its potential opening on Caroline on Crack. The restaurant is set up to showcase New York and Chicago cuisine. As the name hints, the place primarily focuses on the pizza, but also offers up some sub sandwiches, salads, and appetizers from each city. The decorations are evenly split down the middle with pictures and memorabilia from Chicago on one side and New York on the other.

Now, we are some serious pizza people. In New York, we've done the street corner Joe's pizza, walked the Brooklyn bridge to Grimaldi's, tasted the newly famous Neapolitan-style Keste pizza, and shouldered the 2 hour round trip subway ride to Di Fara's (totally worth it - our favorite, by far!). For the Chicago pie, we've only tried Lou Malnati's. Unfortunately, we ran out of time before making it to Pizzeria Uno or Gino's East. BUT at least we have Lou's as a comparison basis.

Hmmm..maybe we should take a step back to explain the difference between NY and Chicago pizza. Just in case you don't get out alot. NY style is a thin crust pizza. The slices are typically gigantic, and the cheese is generally a blend of mozzarella and parmesan. Chicago is deep dish and cuts almost like a pie. The cheese and toppings are on the bottom and middle and the sauce covers the top.

To be fair, and because the 4 of us were starving, we ordered both kinds. We each got a slice of the NY cheese and Bourbon got a sausage/pepper slice in addition. We then ordered the Navy Pier Chicago pie (green peppers, tomatoes, garlic, and mushrooms). Fair warning -- it took about 45 minutes to get the pizza. This is not uncommon. In Chicago, we were warned by our waiter that pies typically take 30-40 minutes to cook. So we satiated ourselves with some house Cab (for the girls) and beer - Deschutes and Green Lakes - for the boys. The drinks are fairly priced: $4-$5 for draft and bottled beer, $6-$8 for craft bottled beer, $5-$9 for the wine. Plus, there's a happy hour Mon-Fri, 3-8pm, with $3 draft beer, $10 pitchers, $4 house wine, and $3 domestic bottles. 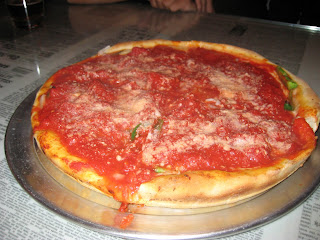 The Chicago pie was the first to arrive. After we had divvied it up, we realized that we had actually been served the Sears Tower (meatballs, mushrooms, tomatoes, and green peppers). The owner was so apologetic about it that he brought us out a free round of drinks and a free order of garlic knots. Sweet! We dug right into the pizza, and we all agreed the flavors were spot on. Meatballs had some nice spice, vegetables still had a twinge of crunch, and the tomato sauce was a great medley of sweet and savory. The crust was also cooked well, crispy on the bottom. This can be tricky for the Chicago pie, where the crust can turn into mush. Our only complaint was that they were pretty heavy-handed on the sauce. Once you scooped the slice out of the pie, the sauce started oozing out. But we spied on other tables and noticed that we were actually the exception. Everyone else's pies looked more compact and held together - so perhaps we just got an unusually large ladle of sauce. But come on people, this was their first day (well, second if you count Wed's soft opening), and after some more spying we'd say we'd say there's tons of potential for this Chicago pie. 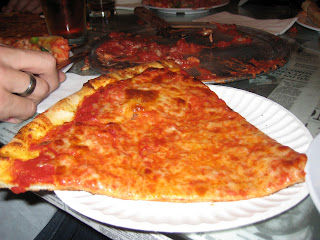 A Single Slice of NY-style Cheese

Next to hit our table was the NY pizza. We all got our cheese slices, and then we noticed 2 more slices of sausage/pepper for Bourbon. Uh-oh, we actually only ordered one? No no, we were informed, they brought out 2 because the kitchen thought that they were both small slices (mind you, they were each much larger than normal pizza slices). Legit! The NY-style was awesome! Perfect snap in the crust as your fold the pizza in half with light char marks on the bottom and the perfectly balanced combination of the gooey mozzarella with salty parmesan. Next time we're ordering the Central Park pizza, which comes with fresh basil on top.

Fun tidbit -- they've got an old school Ms. Pac Man/Galaga combo up front. There's an ongoing competition that whoever gets the new high score gets a free pizza!

Posted by Bourbon and Bleu at 4:40 PM