Last night I discovered a cuisine that I kind of knew existed, but it was finally formalized into one word: Izakaya. An Izakaya is basically a Japanese tapas restaurant. Dishes are small and brought out in absolutely no intended order. The menus are long and sometimes do not seem to logically flow from one dish to another. But, they are fabulously fun. And -- well at least at the Little Tokyo locations I read about -- not too expensive.

We headed over to Honda Ya Izakaya in Little Tokyo with Bourbon's roommate Viren and our friends Chris and Natalie. We were promised a tasty meal at low prices, and we were not let down. All in all, we ordered 16 dishes (don't judge--they were small), 2 pitchers of beer, a 2 large bottles of sake. And it was a tiny bit over $30 per person. This is what we like to call affordable group dining. 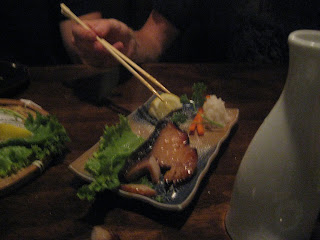 Numero 1: The Miso Black Cod
What's that you say? You've already ordered that at every fancy-shmancy Asian restaurant? Have you ever ordered it for $5.95 and died a little bit inside over the quality of the fish and the taste of the miso? I think not. This taste and size of the piece of fish is comparable to those "Hollywood-style" Asian restaurants, which charge $25 for this dish. 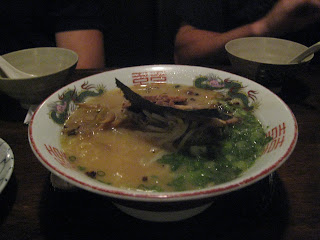 Must Get Number 2: The Ramen
The restaurant had different flavoring and meat options, but we ultimately went with the miso-flavored broth with ramen and pork. AH-mazing. The ramen was buttery and creamy. The broth had tons of depth from the miso. And there was enough pieces of pork to go around 5 bowls of soup (and seconds). Chris and Natalie even said that this ramen was better than plenty of the ramen houses around the area. 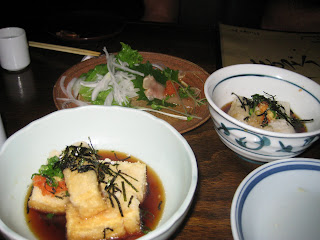 Please Order Number 3: Agadashi Mochi
You think you know what mochi is, right? That rice ball with ice cream inside in the freezer aisle at Trader Joes (mmmm the mango is sooo good)? BUT that's actually incorrect. That is mochi ice cream. Mochi is actually referring to the rice portion that surrounds the ice cream. And, to scare you even more, in traditional Japanese cuisine, mochi is a savory dish, not a sweet one. This dish was made up of 2 giant mochi (large clumps of the rice matter -- it's good, I swear) in a savory miso broth. The mochi was the perfect consistency of chewiness, and it played off very well with the deep, meaty broth.

I Really Loved This Dish Number 4: Nasu Miso (eggplant in miso)
Bourbon and I were quite fond of this dish. Some of the others at our table were only "meh" about it, but they also explained they weren't lovers of eggplant. Do be warned, though: this dish comes out piping hot. oh boy. Large chunks of eggplant sit in a thick, miso sauce (it kinda tasted like terriyaki in this case). It was delicious and a nice break to all the fish, chicken, and meat we were having. Definitely a great dish to order, if you're going the vegetarian route, or not.

Not our favorites...maybe you should skip?
1. Agadashi Tofu - Sister dish of the mochi above.The mochi just went better with the dish and the sauce.
2. Tuna Yamakake -This was the only dish of the evening that we truly disliked. The menu claimed for the dish to be tuna with fresh, shaved yams. But we were served tuna in white goop. It was slimy and not appetizing. And caused a lot of inappropriate-for-the-table word usage, such as "moist" and "mucous," that almost turned us away from the table. But we held strong.

This place is great for groups that are interested in trying lots of different dishes and flavors. Oh, and they also have one of those rooms where you can dine on the ground on low tables and pillows! But service is spotty, so if you see a waiter, grab their attention. It may be a while before the next walks by!