Alright so Banh Mi actually means sandwich in Vietnamese. But when you get the right balance between the traditional ingredients, it is nothing short of delicious. That's exactly what you get at the Nom Nom Truck, now roaming the streets of LA.

So what do I mean by traditional ingredients, you ask? Well, a banh mi is traditionally composed of a roll, vegetables, meat/tofu, and a vietnamese mayo (egg yolk, cooking oil, and maybe some spices). The roll is a Vietnamese baguette, crispy on the outside with an airy and chewy middle. The vegetables usually consist of pickled carrots, daikon, onions, and cucumber that are thinly sliced with jalapenos and my favorite: cilantro. Meat options can vary greatly from chicken to different preparations of pork to pate or head cheese (google it, i don't want to break the new to you).

Checking my twitter on Friday, I saw that the Nom Nom truck would be making an appearance in Little Tokyo that night! After recruiting a few other hungry folks throughout the day, I made the short trip to 1st and central. After some crafty parking, I was next in line staring at the menu.

Nom Nom serves up grilled pork, BBQ pork, lemongrass chicken, and vegetable tofu sandwiches, as well as tacos for those carb conscious people (and, let's be honest, it wouldn't be a true LA food truck without a taco option). You can also choose the "deli special" which is a sandwich containing all the meat options in one roll!

Vietnamese Iced Coffees. Prices range from $1.50 to $2.50. They also offer combos for those looking for a full meal and drink. I opted for the monster combo (12-inch banh mi, 3 tacos and a drink) for only 10 bucks! 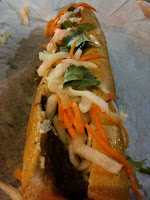 BBQ Pork Banh Mi: First of all, this sandwich was bigger than I expected. Some banh mis you find will be lacking in the filling, but not at Nom Nom. Overflowing with cool, crisp vegetables and tender BBQ pork, the sandwich was framed by the classic baguette. The first bite was everything I had hoped for; the roll was perfectly baked, the spice of the cilantro and jalapenos are perfectly offset to the spread of mayo. 15 or so bites later, I groan in contentment and look ahead to the tacos.

Tacos: I wanted to try all the meats, so I ordered one lemongrass chicken, one grilled pork and one bbq pork. Each taco shared the same filling as the banh mi, but the outside was obviously a fresh corn tortilla rather than a baguette. Each of the meats had a enough sauce/marinade that the dryness of the tortillas was kept in check. I personally enjoyed the lemongrass herb with the corn flavor of the tortilla; it was unique and refreshing. 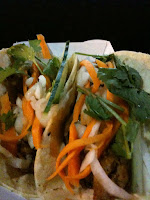 My first experience here did not disappoint one bit and I will definitely be making repeat visits whenever the truck rolls through my neighborhood. Find out when they will be cruising in your neck of the woods by following them on Twitter @nomnomtruck or by checking out the weekly schedule on their website.